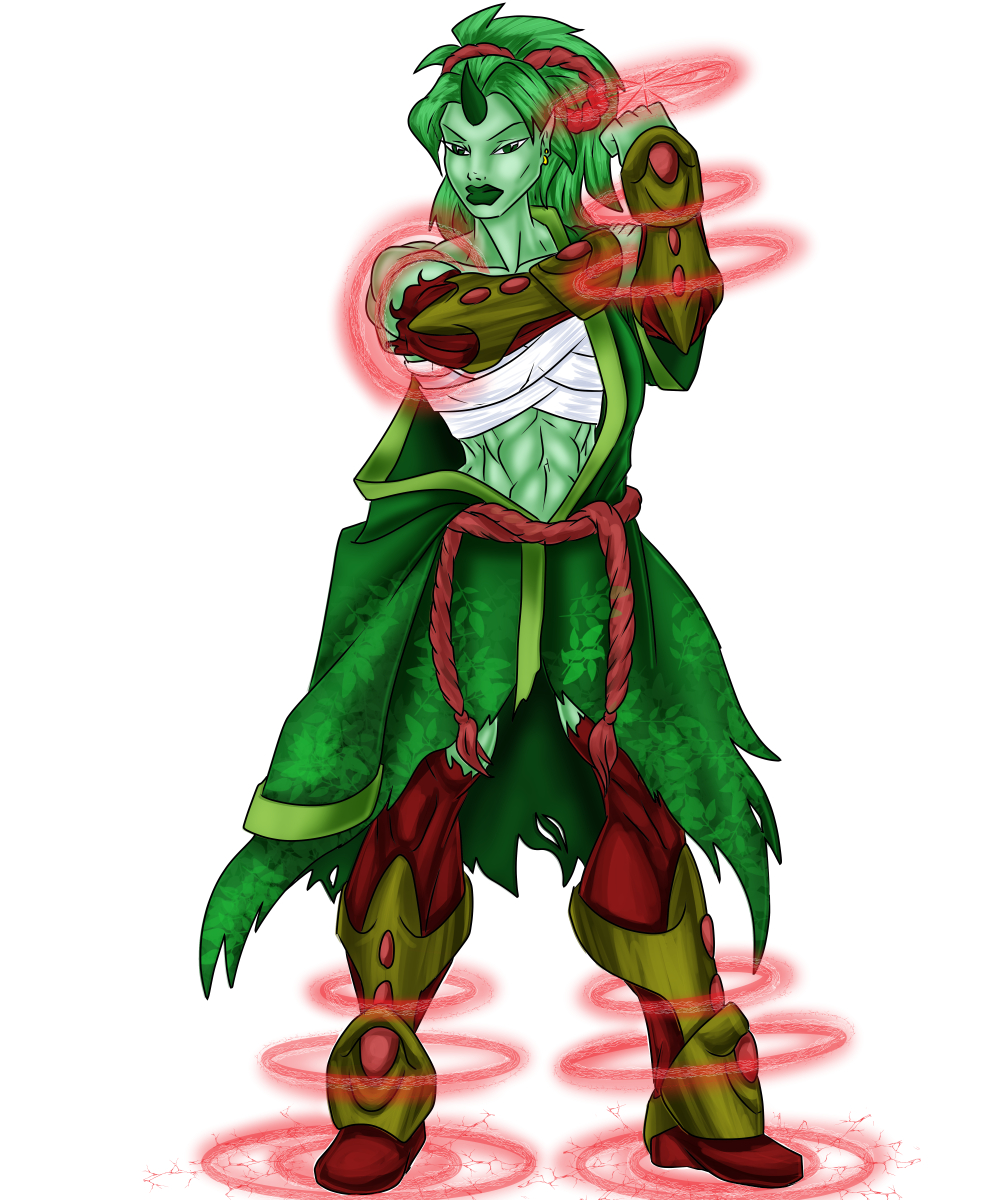 Jeera was born of tragedy. Her, Morning Dew,a curiously gentle name for a caravan worker, was captured in a raid by mutant tribe plundering at the edge of the 100 Kingdoms and held as a slave for a year before a chance encounter with a kingdom's patrol freed her. She was whole, but carried with her a new born, the child of her master forced on her. But over the months, she'd come to care for the little one, her faith in goddess Vitira, Lady of Hearth and Home, Mother of Mothers helped and pledged to raise the girl even journeying to the city of Nexus for work as a horse woman and stock handler for the market and auctions in that city.

Jeera, as her father had perfunctorily dubbed her grew fast and strong, marked with his mutation, a single blunt horn on her forehead but otherwise quite fit and healthy. Very much so and marked as she was with her father's stength and her mother's spirit, Jeera didn't take the teasing and bullying her looks drew, fighting tooth, nail (and occasional horn assisted headbutt) for respect. Which earned over the bloodied bodies of her opponents, eventually becoming a renowned street brawler then a pit fighter,

When her Terrestrial Blood burned and awakened, turning her skin a verdant green symbolic of her Elemental Dragon ancestor, during a particularly brutal match, Jeera achieved some degree of fame and greater purses for her victories. She attracted the attention of Divine Oak, a disillusioned, alcoholic but honorable ex Monk that saw her potential and took her under his wing, schooling the brawler in finer point of the combat art and using her essence to fuel her combat and some bit of philosophy though mingled with cynical drunken ramblings that yet fit somehow,

She studied under Oak for years and did other things under him as well. He'd abandoned his divine calling and the oath of celibacy (and sobriety) that came with it. Jeera, quite happily, lost her maidenhood to him. Her suspected but was glad her awakening had been joyous and more importantly willing. Tragedy struck again when Oak, after jostling the notorious Pelep Deled, was slain for his “betrayal” of the Immaculate Dragons. As he died in Jeera's arms, he commanded her to flee not seek to avenge him. She was not ready. Yet.

She took is command and his meaning and did flee, taking her mother with her into the countryside, seeking and finding an isolated dojo her nominal sifu had muttered about, proved her worth their by raw prowess against several of the all male school. She did not formerly join but attended while living with her mother in a hidden cottage, becoming something of a local heroine to the tiny village nearby. Her mother later succumbed peacefully to the fate of all mortal and Jeera continued on, fighting and training for the day her vengeance would come.
'A goddess rewards a mortal with torrid oral sex on the stairs of the city's greatest manse. In Lookshy its a legend that's lasted generations; in Great Forks its Tuesday"

Users browsing this forum: No registered users and 30 guests