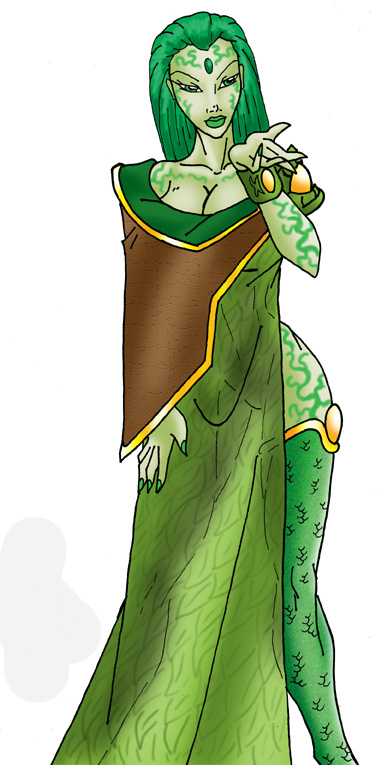 V'neef Orchina is well know among Dragonblooded society for her compassion and concerns for the welfare of mortals and Creation as a whole. While she is as much of a warrior as any Dragonblooded (in fact, Orchina can trace her bloodline back to several legendary figures of the Shogunate and earlier), she normally eschews violence in favor of more constructive solutions. At times her heretical ideas (among them fostering at least some limited essence use of among mortals) have brought under scrutiny from the powers that be, particularly the Immaculate Order. But she stands by her beliefs and usually wins over her opponents through with wit, intelligence and conviction and they end up respecting her if not sharing her opinion. Orchina is intelligent to know how not to push things too far and usually works very quietly on her more questionable projects, tending them like a gardener watching over very fragile flowers, coaxing them to bloom.
'A goddess rewards a mortal with torrid oral sex on the stairs of the city's greatest manse. In Lookshy its a legend that's lasted generations; in Great Forks its Tuesday"

Users browsing this forum: No registered users and 26 guests